St. Paul was a haven for notorious criminals in the late 1920s and early 1930s when local law enforcement turned a blind eye to the underworld activities of gangsters, bank robbers, and bootleggers.  One of the most cold-blooded groups to take up residence in the city was the Barker-Karpis gang.  Between 1931 and 1935, the Barker-Karpis gang went on a brutal crime spree that stretched from Florida to Minnesota.  Originally organized by prison mates Fred Barker and Alvin “Creepy” Karpis, the gang also included Fred’s brother, Arthur “Doc” Barker, as well as his mother, Kate “Ma” Barker and other notable criminals.

After Fred Barker and Alvin Karpis were released from the Kansas State Prison in early 1931, they met up in Tulsa, Oklahoma where they formed the Barker-Karpis gang.  Later that year, on November 8, Fred Barker, William Weaver, and Alvin Karpis were casing the town of Pocahontas, Arkansas looking for places to rob.  The town’s night marshal on duty, Manley Jackson, became suspicious and stopped their vehicle to investigate.  Barker forced Jackson into their car at gunpoint and then kidnapped and later murdered him in cold blood.

Over the next few weeks, Karpis and Fred Barker pulled off a string of crimes in Missouri, including the burglary of McCallon’s clothing store in West Plains on December 17th.  Two days later, Karpis and Barker pulled into the Davidson’s Garage in West Plains.  Karpis’ vehicle, a 1931 blue De Soto, had two flat tires that needed repair.  Recognizing that the vehicle matched the description of one near McCallon’s store the night of the robbery, the suspicious garage owner quickly contacted Howell County sheriff C.R. “Roy” Kelly.  When the sheriff arrived on the scene, Karpis and Barker were still seated in their car.  As Kelly approached the driver’s side of the DeSoto to investigate, Barker and Karpis opened fire on the sheriff killing him.

After the murders of the two lawmen, the Barker-Karpis gang went on the run. In February of 1932, they arrived in St. Paul, a safe haven for criminals due to the O’Connor layover agreement. The O’Connor system allowed criminals to remain in St. Paul under three conditions: they had to check in with police upon their arrival; they had to give a portion of their earnings to the police department; and while in St. Paul they couldn’t commit any major crimes, though Minneapolis was fair game.

Upon their arrival in the city, the gang, posing as a family of musicians, rented a house at 1031 South Robert Street. At the time, the house was owned by the Hannegraf family.  The Hannegrafs had no concerns with renting their home to what appeared to be a middle-aged mother and her family of nice young men. During their time in the house, the tenants were reportedly quite friendly with their neighbors.

Despite being on the run and in hiding, however, the gang couldn’t resist planning a job. On March 29, 1932, the Barker-Karpis gang robbed the Northwestern National Bank and Trust over the river in Minneapolis.  No one was injured or killed during the robbery, but the gang made off with $266,500 in cash, coins and bonds. Their escape vehicle was a Lincoln owned by an executive of the National Lead Battery Co. of St. Paul, which the gang had stolen specifically for the bank heist.

Their time at 1031 South Robert Street didn’t last very long. On April 25, less than three months after the gang had moved in, the Hannegraf’s son, Nick, discovered a wanted ad in True Detective magazine that featured pictures of the Barker-Karpis gang. He immediately called the Saint Paul Police Department.  The police chief at the time, Tom Brown, advised Hannegraf to make a report at the Central Police Station.  The desk sergeant there informed Hannegraf that he would have to return later and speak with Inspector James Crumley.

Seven hours after the first call was made to Chief Brown, St. Paul police officers raided the house at 1031 South Robert Street.  Not surprisingly, the Barker-Karpis gang had been tipped off to the impending raid and were long gone.

On June 15, 1933, the Barker-Karpis gang masterminded the high-profile kidnapping of William A. Hamm, Jr., President of the Theodore Hamm Brewing Company.  Hamm was abducted just after leaving his office to walk home on his lunch break.  Four members of the gang grabbed him and pushed him into the back of a car parked at the corner of Minnehaha Avenue and Greenbrier Street (formerly Cable Street).  A $100,000 ransom secured Hamm’s release a few days later on June 19, but the kidnapping marked a new era in St. Paul crime.

On August 30, 1933, the gang robbed a payroll at Stockyards National Bank in South St. Paul.  During the robbery,  South St. Paul police Officer Leo Pavlak was shot and killed and Officer John Yeaman was struck multiple times by machine gun fire, including one bullet to his face.  Yeaman survived his injuries. but the gang made off with $33,000.

On January 17, 1934, the gang struck again, this time kidnapping banker Edward G. Bremer, Jr.  Bremer was on his way to work, after having just dropped off his daughter  at the Summit School in St. Paul, when he was approached by two men.  One of the men, later identified as Arthur “Doc” Barker, repeatedly punched and pistol-whipped Bremer, then forced him into the back of his own car.  After having some difficulty starting the vehicle, the two men sped off with Bremer in the back seat, later switching to another car.  Bremer was held captive in Bensenville, IL for the next three weeks until February 7th when the kidnappers received a ransom of $200,000.

While the kidnapping of Edward Bremer Jr. was successful in netting the gang a sizeable ransom, it ultimately resulted in bringing down the full force of the Federal Bureau of Investigation on them and the gang split up. Alvin Karpis, the presumed leader of the Barker-Karpis gang, was named “Public Enemy No. 1“.

Members of the gang began crisscrossing the country, with some even fleeing to Cuba.  The ransom loot was passed back and forth by the gang as they looked for ways to launder the bills.  Karpis, however, became increasingly concerned that the ransom money had not been laundered and would be used by the FBI to track them down.  As a result, the gang soon returned to the U.S. and made their way to Lake Weir in Ocklawaha, Florida.

Doc Barker eventually travelled to Chicago with aspirations to organize a new criminal organization of his own. Soon after his arrival there, however, he was recognized and arrested on January 8, 1935.  Doc was eventually convicted of  the kidnapping of Edward Bremer Jr. and sentenced to life in prison.  On January 13, 1939, he was shot and killed while trying to escape from Alcatraz.

In January 1935, a map of Florida with Lake Weir circled on it was found during a raid of gang members in Chicago, leading federal agents to Ocklawaha.  Fred and Ma Barker were subsequently killed in an almost 5 hour shootout with the FBI at Lake Weir on January 16th.

On May 1, 1936, the FBI located Alvin Karpis in New Orleans, LA.  The director of the FBI, J. Edgar Hoover, flew there to lead his team in apprehending Karpis. Shortly after 5:00 PM the following day, approximately a dozen agents descended on Karpis in his car and arrested him.

Karpis was brought to trial at the St. Paul Federal Courts Building (now Landmark Center). He initially pled not guilty to the kidnapping of Edward Bremer Jr., but ultimately entered a guilty plea of conspiracy to commit the kidnapping.  He was sentenced to life in prison and served his time in Alcatraz. Karpis became the prison’s longest serving inmate but was eventually paroled in 1969 and deported to Canada where he settled in Montreal.  He moved to Spain in 1973 and died under suspicious circumstances on August 26, 1979.

The Barker-Karpis hideout house is located at 1031 South Robert Street in what today is West St. Paul.  It is privately owned and houses offices for realtor Artemisa Boston. 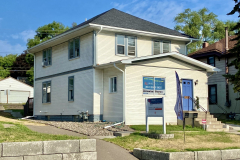 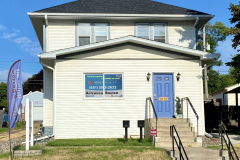 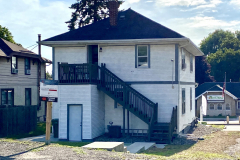 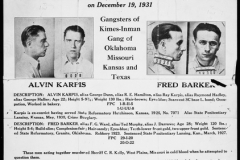 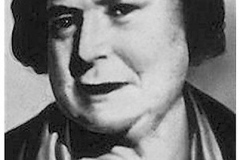 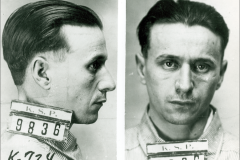 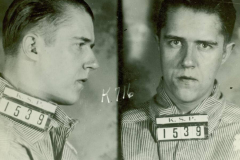 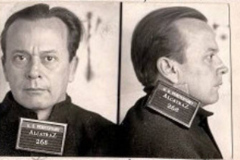 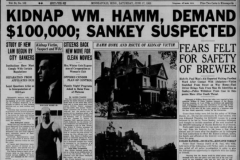 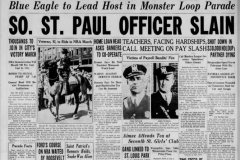 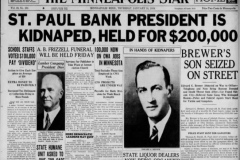 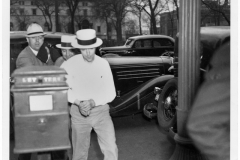