On an empty, overgrown lot located at the corner of Armour and Hardman Avenues in South St. Paul sits the only remaining vestige of what was once the largest livestock operation in the world.  Developed on 260 acres along the Mississippi River, five miles south of downtown St. Paul, the stockyards employed over 6,000 people during its peak decades between the 1930s and 1960s.  Today, all that remains of this once massive complex are two unassuming brick columns – the ‘Armour Gates’.  [Go to photo gallery]

The St. Paul Union Stockyards in South St. Paul were founded on June 30, 1886 by railroad magnate Alpheus B. Stickney.  This event marked the beginning of what would become the economic foundation of the city for the next one-hundred and twenty years.  Just over a year later on September 30, 1887, the first shipment of cattle arrived in the South St. Paul yards from Montana.  Overnight, the livestock were fed and watered and continued on to Chicago the next morning (1).  Over the next ten years, the stockyards operation slowly grew until 1897 when Swift and Company of Chicago signed a 999-year lease with Stickney establishing the first major packing facility at the complex.

That same year, Armour & Company was being courted by another Minnesota stockyard operation. The owners of the Minneapolis Stockyards and Packing Company in New Brighton tried to lure Armour to their city, but the local residents objected to expansion of the meatpacking industry in their community.

In 1906, General Mark D. Flowers of the St. Paul Union Stockyards Company offered Armour & Company $1.5 million in stocks and bonds and 20 acres of land in an unsuccessful attempt to lure them to the South St. Paul stockyards (2).  In 1915, however, with the Great War raging in Europe, Armour was offered federal subsidies by the U. S. government to expand their operation in order to help feed thousands of American troops that could be potentially stationed abroad.  The logical location for this expansion was South St. Paul. In 1917, Armour & Company began construction of a massive complex at the stockyards.

Upon completion in December, 1919, the Armour & Company meat processing plant in South St. Paul was considered to be the most modern facility of its kind in the world.   Situated on 47 acres of land on the west bank of the Mississippi River, the six-story facility was the largest industrial plant in the Twin Cities.  Completed at a cost of $14 million, the complex consisted of 22 buildings and initially employed about 2,000 people.

For the next six decades, the Armour plant was a major supplier of meat to the U.S. market.  At its peak, the Armour complex employed 4,000 people who slaughtered and processed nearly 2,000 animals an hour.  The plant produced sides of beef, lard, canned chili, mutton, Dial soap, hides and fertilizer among other products.  Work at the plant was disrupted by major strikes in 1921, and 1948 as workers rallied for better working conditions and higher wages.

From 1974 to 1981, the South St. Paul stockyards were the largest livestock market in the world.  Armour’s reign as a giant in the industry didn’t last however. Changes in the way meat was raised, packed and marketed altered the landscape of the meatpacking industry significantly, ultimately rendering the facility obsolete. The company closed its South St. Paul plant on June 13, 1979.  A decade later, on June 1, 1989, demolition of the facility got under way.  Only the gates to the massive complex were spared the wrecking ball.

In the 1980s and 1990s as meat processing companies increasingly bypassed the middle-man and obtained supplies directly from the source, the South St. Paul stockyards began a steady decline.  More and more packing and processing companies closed their doors and left the city for good.  Central Livestock, the last dealer to operate in the stockyards, kept operating until metro sprawl and internet transactions made it difficult to remain in business in the city (3).  Finally, on April 11, 2008, the South St. Paul stockyards held its final cattle sale.

New Life for an Old Site

Today, Bridgepoint Business Park stands on the location where both the Swift and Armour facilities once dominated the riverfront landscape.  A conglomerate of light industrial and commercial operations that make up the business park contrast significantly with the stockyard operations of the past.   The Armour gates, however, still stand as a reminder of a time when cattle ruled South St. Paul’s bustling commercial landscape and the city itself ruled the meat packing industry. 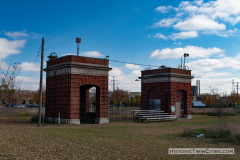 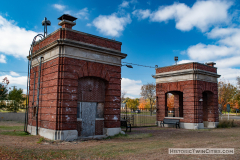 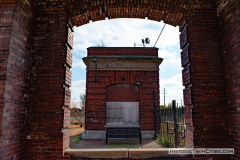 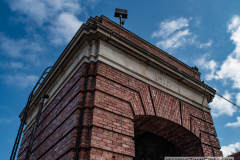 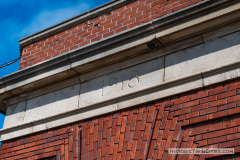 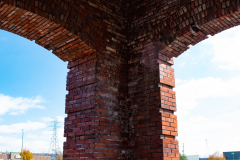 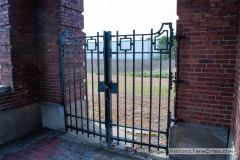 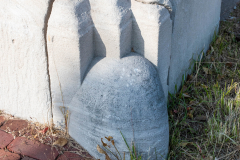 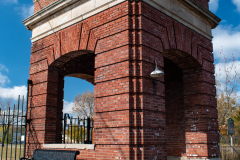 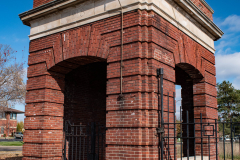 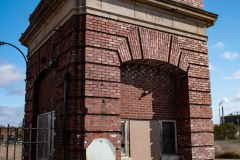 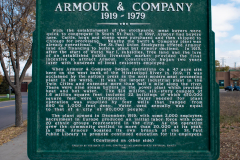 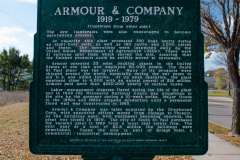