Opened in 1933 on St. Paul’s West Side, the Castle Royal was publicized as the “World’s Most Gorgeous Underground Nightclub” by local newspapers.  Performers such as Cab Calloway, the Dorsey Brothers and Harry James performed at the club during its heyday.  Rumor also has it that patrons of the club included gangland legends such as John Dillinger and Ma Barker among others.  Today, the former site of the Castle Royal is operated as the Wabahsa Street Caves.

Carving Out a Niche

Before European settlers arrived in St. Paul in the 1800’s, indigenous tribes used a number of naturally formed caves carved out of the soft St. Peter sandstone by the Mississippi’s rushing waters.  Around the 1840s, some of these naturally formed caves were enlarged and new ones dug when the area was mined for silica sand to be used in glass production.

Beginning in the 1880’s, mushrooms were grown in the cool, damp interiors of these West Side caves.  At its peak, the area was referred to as the “Mushroom Capital of the Midwest” and more than 50 of the caves were used for this purpose.  Several miles of the Mississippi River gorge in St. Paul, including what are now Plato, Water, and Joy Streets were dubbed “Mushroom Valley”.  The area’s mushroom industry lasted for a century until around 1980.

Albert Mouchnotte, a French immigrant who arrived in St. Paul in the early 1900s started his mushroom growing operation with other investors in what are today the Wabasha Street Caves.  During Prohibition in the 1920s, Mouchnotte converted the caves into a restaurant and nightclub venue known as the Wabasha Street Speakeasy.

According to local legend, four gangsters were playing cards in the Fireside Room at the Castle Royal when a man with a case arrived and abruptly asked the band to leave. They complied, and the cave emptied leaving just the five men and a waitress. The waitress briefly left the men and went to the kitchen.  While there she heard what sounded like the pops of a Thompson submachine gun. She ran back to the Fireside Room to find three men shot dead. The fourth card player had run off with the man carrying the case, his likely accomplice.

The waitress immediately contacted the St.Paul police.  Upon arriving , the police went in to check the caves without her. When they returned, the police accused the waitress of filing a false police report. They claimed they had found no bodies, no blood and no evidence that a crime ever took place there. The waitress, however, insisted that bullet holes left in the stones of the fireplace were evidence that a crime occurred.

Rumor has it that the three murdered men were buried in another cave, either by the killers or the police themselves.  To this day, bullet holes can still be seen in the ornate fireplace of the Fireside Room.

Castle Royal was closed in the late 1930s due to the start of World War II and was again used as a mushroom growing operation.  Over the years, the Wabasha Steet Caves have been used for a variety of other purposes as well.  From 1940 to 1959, they were used as a storage facility for Land O’Lakes cheese.  In the late 1970s, Castle Royal 2 was opened as a venue for Disco music.  The caves have also been used as a place to storage debris that was washed up from the flooding Mississippi River. Some of these things still remain in the caves.

Today, the former site of the Castle Royal is operated as the Wabahsa Street Caves and is host to a variety of events such as weddings, banquets, swing dancing nights and cave tours. 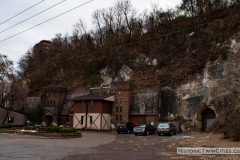 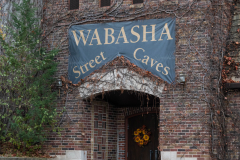 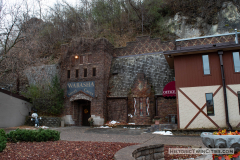 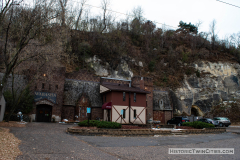 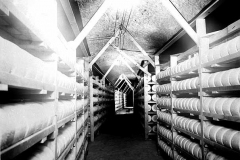 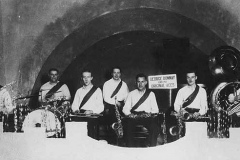 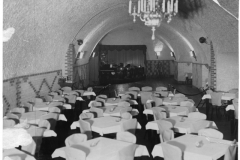 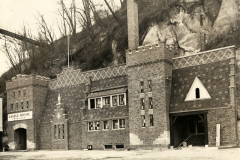 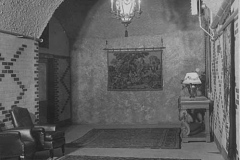