Shortly after news of Fort Sumter’s fall reached Washington D.C. on April 14, 1861, Minnesota Governor Alexander Ramsey, who had been visiting the nation’s capitol to address conflicts within the Minnesota Republican party, immediately offered 1000 men to the Secretary of War on behalf of the State of Minnesota. With this commitment, Ramsey became the first governor to offer troops to the United States government in support of the Union Army’s effort to quell the southern rebellion. The following evening in St. Paul, Josias Ridgate King, a member of the Pioneer Guard of St. Paul, stepped forward at the Armory to sign his name at the top of the enlistment book, thus making him the first man to volunteer for the Union Army.  [Go to photo gallery]

King was born on February 21, 1832 in Washington D.C. to a wealthy and prominent family. He attended Georgetown University with the intention of attending the U. S. Military Academy at West Point. His plans changed, however,  upon hearing of the gold rush in California, and over the next few years King prospected for gold out west.  He never struck it big and eventually returned home in 1856.  Upon his arrival, King’s father secured him a position as an assistant to the Surveyor General of the Minnesota Territory and on April 19, 1857, he arrived in St. Paul.  Shortly after his arrival there, King joined the newly formed local militia called the Pioneer Guards.

After his enlistment with the Union Army in April 1861, King was mustered into Company A of the famous First Minnesota Volunteer Infantry Regiment with the rank of 1st Sergeant. Over the course of the Civil War, he moved up through the ranks serving with several companies. He saw action in a number of battles during the war including Bull Run, Edward’s Ferry, the siege of Yorktown, Vienna, South Mountain and Antietam to name a few.

In mid-1863 King was briefly assigned as an aide to General Alfred Sully. This assignment took him west to the Missouri River where he accompanied General Sully during the campaign against the Indians.  Due to this assignment, King was not with the First Minnesota during the Battle of Gettysburg, for which they are most remembered.  On Sept 14, 1863, he transferred back to the First Minnesota becoming a 1st lieutenant of Company A.  A promotion to Captain of Company G followed on October 19.  King was later wounded at Savage’s Station in Virginia and on May 5, 1864, he was mustered out with the regiment.

After the war, King continued to serve in the military until 1871 when he retired at the rank of Lieutenant Colonel and returned to St. Paul to care for his ailing wife. In 1885, he was appointed to Inspector General of the Minnesota National Guard where he implemented a number of improvements, ultimately earning himself the title of “Father of the Minnesota Guard.”

In 1893, the Acker Post 21 of the Grand Army of the Republic, a Civil War veterans group, passed a resolution to erect a Civil War memorial on St. Anthony Hill at the head of Third Street near Summit Park. Ten years would pass before the monument would be realized. In 1903, Josias King was chosen to pose for the face of the bronze statue that would adorn the top of the Soldiers and Sailors Memorial. The statue was created by prominent Minnesota sculptor John Karl Daniels. While the face of the figure was created by Daniels, the body is actually a generic cast of a Union solder. The statue sits atop a 26-foot high monolith made of Vermont granite, which itself is set on a base of Minnesota granite. The total height of the memorial is 52-1/2 feet. Set into each of the four sides of the granite base are bronze plaques.

The dedication ceremony on November 20, 1903 was attended by several thousand people and included a military parade, marching bands, canon blasts and Josias King himself. The memorial, built at a cost of $9,000, was originally located at the head of Third Street, near the corner of Summit Avenue, adjacent to the current site of the Cathedral of St. Paul. Prior to construction beginning on the Cathedral in 1906, however, Summit Avenue had to be realigned which required relocation of the memorial across the street to Summit Park where it still stands today.

Josias King continued working into his eighties to supplement income from the small military pension he received. On occasion he would also receive financial assistance from his friends, one of whom included James J. Hill.  In 1915 he was injured in a streetcar accident. In failing health and with little financial security, the citizens of St. Paul raised $2,500 during Christmas 1915 to provide for King’s needs. The check was presented to him by James J. and Louis W. Hill. On February 10, 1916, King passed away from a heart attack.  His funeral, presided over by Archbishop John Ireland, was attended by over 5,000 people including Governor Joseph Burnquist, St. Paul Mayor Winn Powers and James J. Hill, among others.

For over 115 years, the Soldiers and Sailors Memorial, or Josias R. King Monument as it came to be known, has proudly stood at the foot of Summit Avenue.  For 110 of those years, the memorial stood in darkness each night after sunset.  In 2013, permanent lighting was added to the memorial at a cost of $20,000. The funding for the lighting was donated by the family of Edward “Mike” Murphy III, who were themselves descendants of two of the First Minnesota Regiment’s veterans.

As one would imagine, the Minnesota weather has not been kind to the memorial.  Over the years, the bronze statue oxidized and deteriorated and the granite base became chipped and worn.  In 2017, at a cost of $120,000, the memorial was fully restored.  Rust and flaking were removed from the statue and it was sealed to prevent any further damage.  The massive granite pedestal was restored as well.  Due to the effort of the Civil War veterans group to erect this memorial over a century ago, as well as the work done recently to restore it, the Soldiers and Sailors Memorial will stand proudly as a reminder of those men from the State of Minnesota who bravely served in the Union Army during the worst conflict in United States history.

The Soldiers and Sailors Memorial is located just northeast of the Cathedral of St. Paul in Summit Monument Park.  The park is located at 185 Summit Ave and bounded by John Ireland Blvd. to the west, Summit Avenue to the southeast and W. Kellogg Blvd. to the northeast. 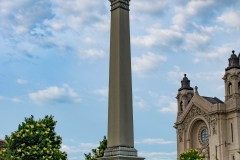 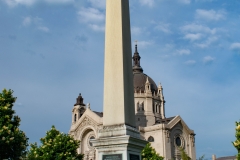 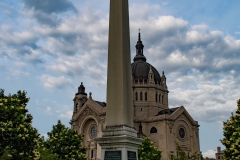 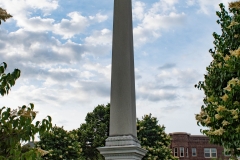 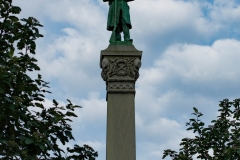 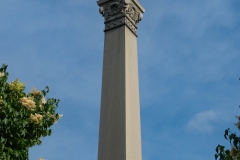 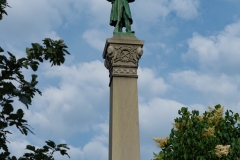 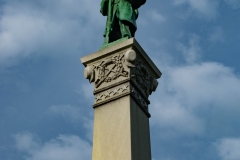 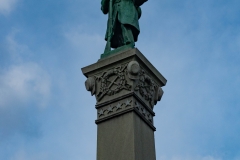 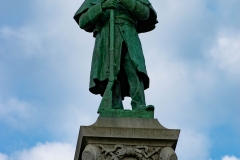 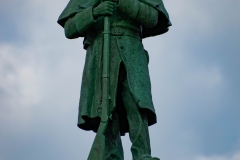 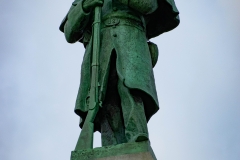 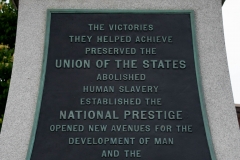 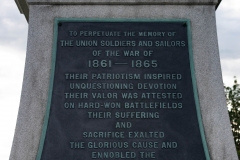 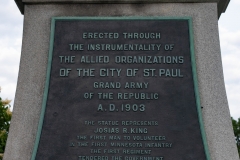 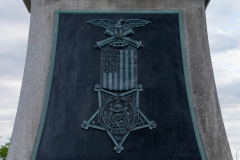