Just above the falls of Minnehaha Creek in Minneapolis, perched on the southwest side of its rushing waters, sits an unassuming symbol of the area’s original inhabitants.  The sculpture of Hiawatha and Minnehaha has been a fixture in Minnehaha Park for over 106 years greeting visitors as they make their way to the falls.  Its origins, however, actually date back to the mid 1800s and stretch from Minneapolis to Chicago and back again.  [Go to photo gallery]

In 1855, Henry Wadsworth Longfellow published the epic poem entitled ‘The Song of Hiawatha’.  The poem tells of the adventures of an Ojibwe warrior named Hiawatha and his love for a Dakota woman named Minnehaha.  Longfellow used the writings of ethnographer and United States Indian agent, Henry Rowe Schoolcraft, as the basis for the legends and ethnography found in his work.  Widely read, the poem had a significant cultural impact in the United States for many years after its publication.

In 1893, Norwegian sculptor, Jacob Fjelde, who had recently immigrated to Minnesota, was commissioned to create a sculpture to be displayed at the entrance of the Minnesota Building at the 1893 World’s Fair in Chicago.  Fjelde chose to depict Hiawatha carrying Minnehaha as described in the excerpt from Longfellow’s poem below:

“Over wide and rushing rivers
In his arms he bore the maiden;
Light he thought her as a feather,
As the plume upon his head-gear;
Cleared the tangled pathway for her,
Bent aside the swaying branches,
Made at night a lodge of branches,
And a bed with boughs of hemlock,
And a fire before the doorway
With the dry cones of the pine-tree.”

Fjelde found it difficult to find American Indian people after whom he could model the faces of the sculpture.  As a result, he relied on photographs to guide his work.  Fjelde’s original version of the Hiawatha and Minnehaha sculpture made of plaster was displayed in the Minnesota Building for the duration of the 1893 Chicago World’s Fair.  When the fair closed, the sculpture was put on display in the Minneapolis Public Library.

In 1902, an effort was launched to cast a bronze version of Fjelde’s Hiawatha and Minnehaha sculpture and place it near the falls in Minneapolis’ Minnehaha Park.  Mrs. L.P. (Lizzie) Hunt, a founding member of the Mankato Art History Club, organized a fundraising drive that encouraged schoolchildren to contribute pennies to defray the cost of the sculpture which totaled more than $1000.  The plan drew criticism from the state art commission claiming that the sculpture’s features were too effeminate and not Indian enough. Unfortunately, Fjelde died in 1896 and no significant changes to the sculpture could be made.

The debate over the sculpture dragged on for years.  Finally, ten years after the campaign began, Hiawatha and Minnehaha was cast in bronze.  On October 5, 1912, it was unveiled during a public ceremony presided over by Charles Loring – the “Father of Minneapolis Parks.” Ten schoolchildren from Longfellow school recited a portion of ‘The Song of Hiawatha’ and four of Fjelde’s neices placed a wreath upon the statue in memory of their uncle.

Over the years, the sculpture became a regular attraction in Minnehaha Park and was frequently featured on postcards – like many other attractions in the Twin Cities.  Today, the sculpture still sits in its original location along Minnehaha Creek and remains a “must see” for park visitors.

The sculpture of Hiawatha and Minnehaha sits on the northwest side of Minnehaha Creek just upstream from the falls in Minneapolis’ Minnehaha Park located near the intersection of Godfrey Parkway and South Minnehaha Drive.  The parks hours are 6:00 AM to midnight. 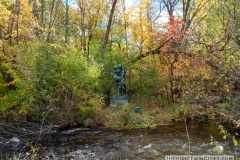 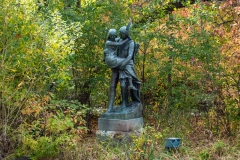 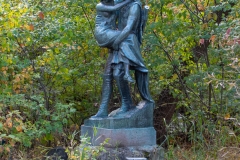 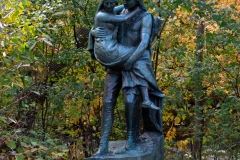 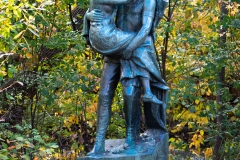 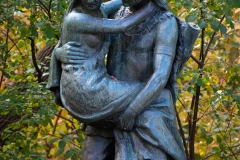 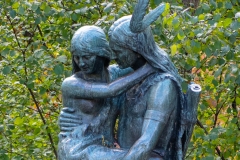 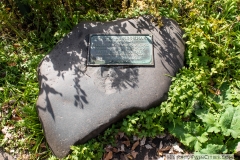 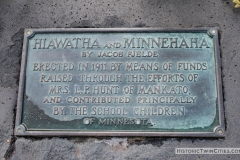 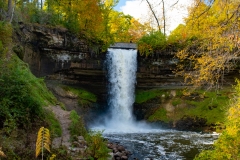 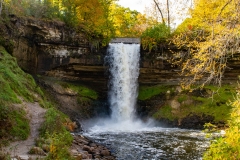 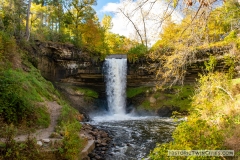